Vacation is over. Classes start in the morning, I’m jobless and my roller coaster career-life-balance aspirations are running wild, keeping me up at night.

Patience has never been my virtue. Sitting still, an eternal challenge. My parents, bless them, can attest to the failure that is my attempt to focus on the present. I know once I crack the books tomorrow, things will feel like they are moving again, albeit slowly. But for now in the midst of this inner turmoil, I wish I could crawl back into the temporary escape from reality that was an indulgent island life for one week. What a lovely cocoon of gleeful ignorance it was..

First, there was an ungodly-early alarm, and a sunrise flight, 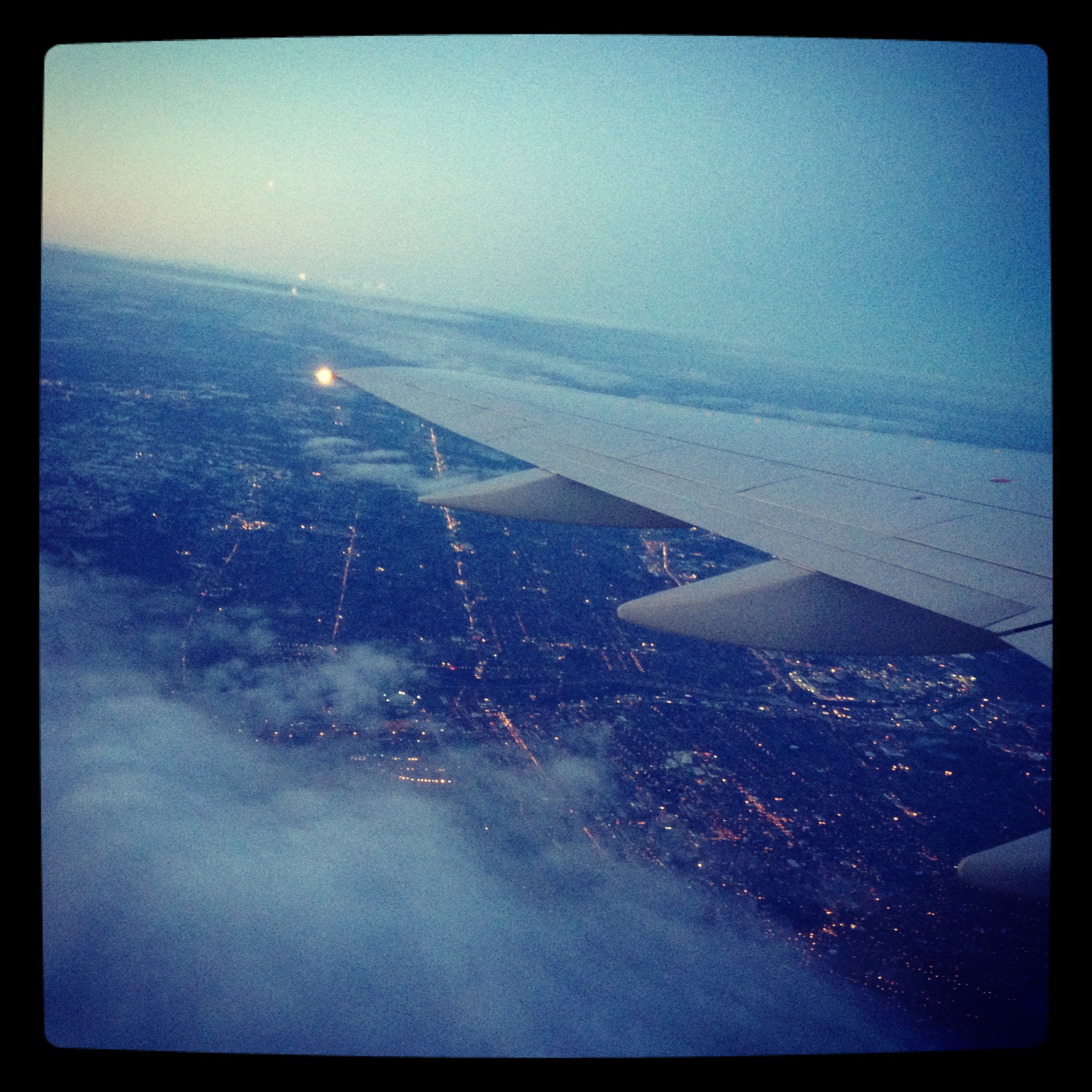 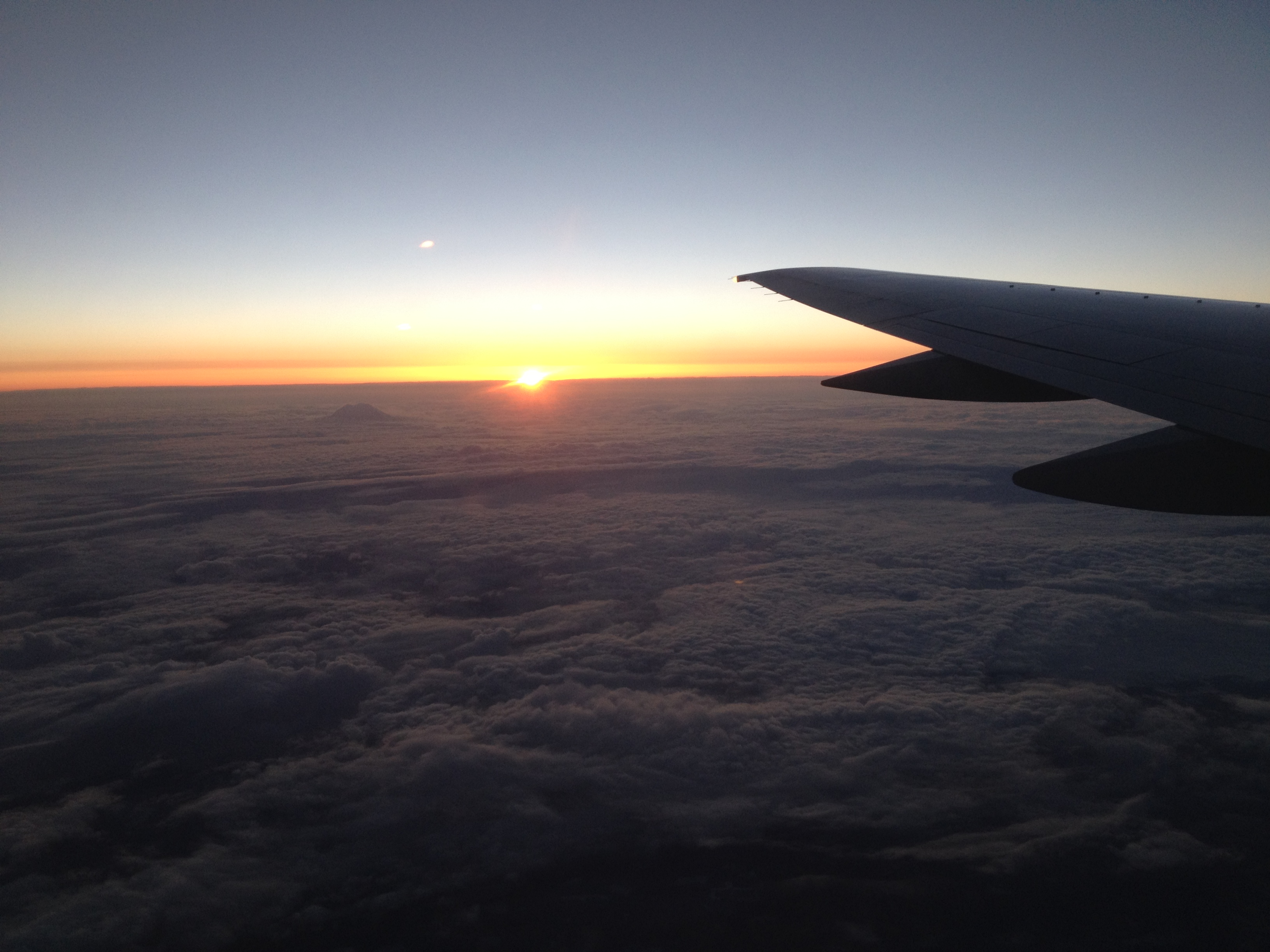 and then we came down from the sky, to be engulfed in plumeria-scented waves of humidity and bright, hot sunlight.

We rolled down the windows, rolled up our pant legs, squinted ecstatically at the hot island sun, and drove up the coast to the Northern shore. Soon, the asphalt gave way to warm sand, wave sounds and green green green everywhere. 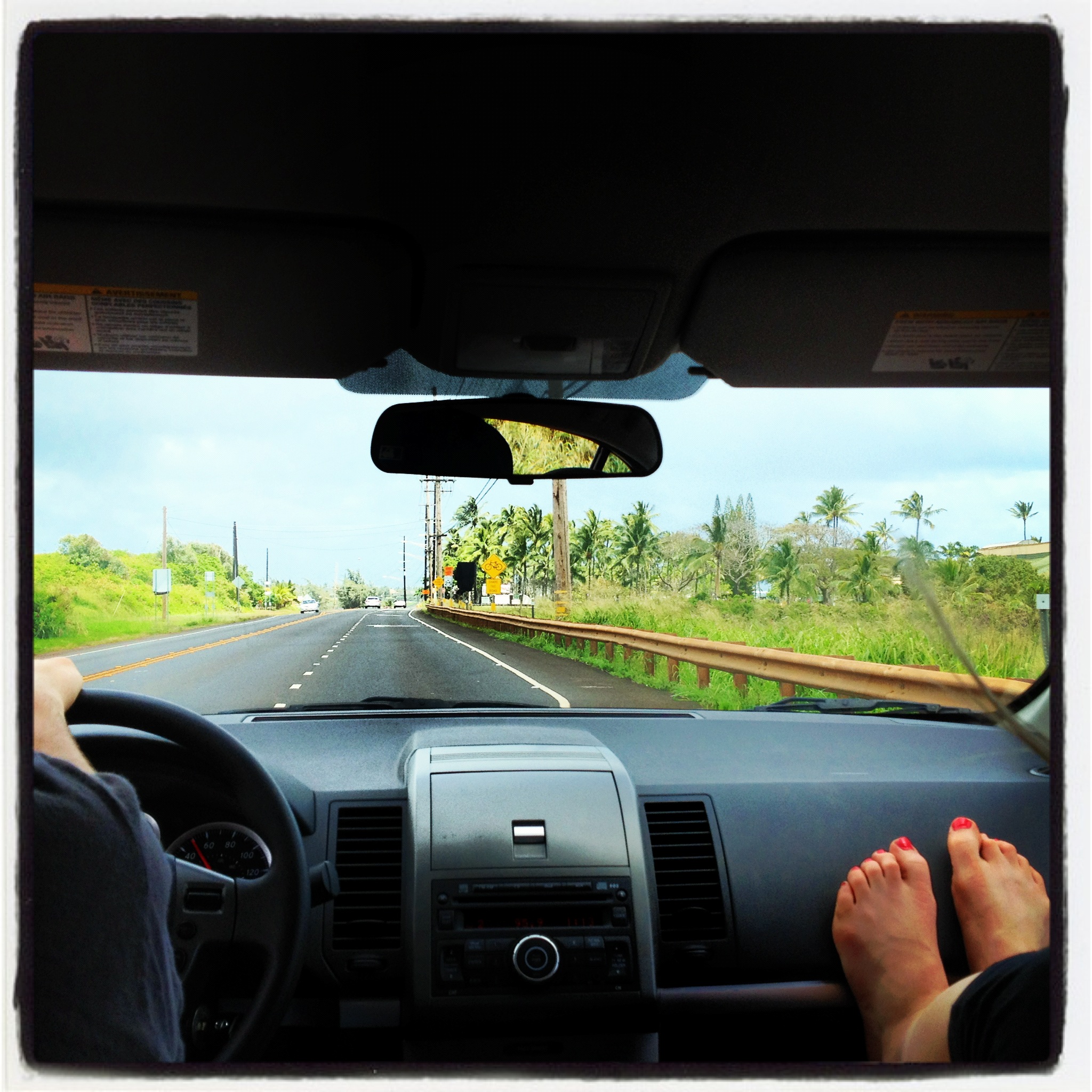 Over the next seven days, we stuffed ourselves silly with adventure, heavy doses of sun, and close encounters with Hollywood’s elite. On Friday, I unknowingly stood in front of John Slattery, in line at the organic coffee shop in Hanalei. He looks shorter in person. Bryce also claims that it was a preggers Reese Witherspoon sitting five feet away from us at Poipu, and that he surfed next to Clint Eastwood, but don’t believe his tall tales. I was there. The jury might be out on Reese, but that was no Dirty Harry on a long board.

Celebrities (or not) aside, the real thrills were plentiful. We trekked eight slippery, soggy miles along the northern NaPali coast, first to a beach guarded by feral cats and then a well-earned waterfall, reached through bamboo groves, river crossings, mosquito attacks and so much mud. At the falls, we climbed up a side ledge and left a shrine made by Tyler’s dad, and I gaped at the quieting simplicity of falling water droplets. 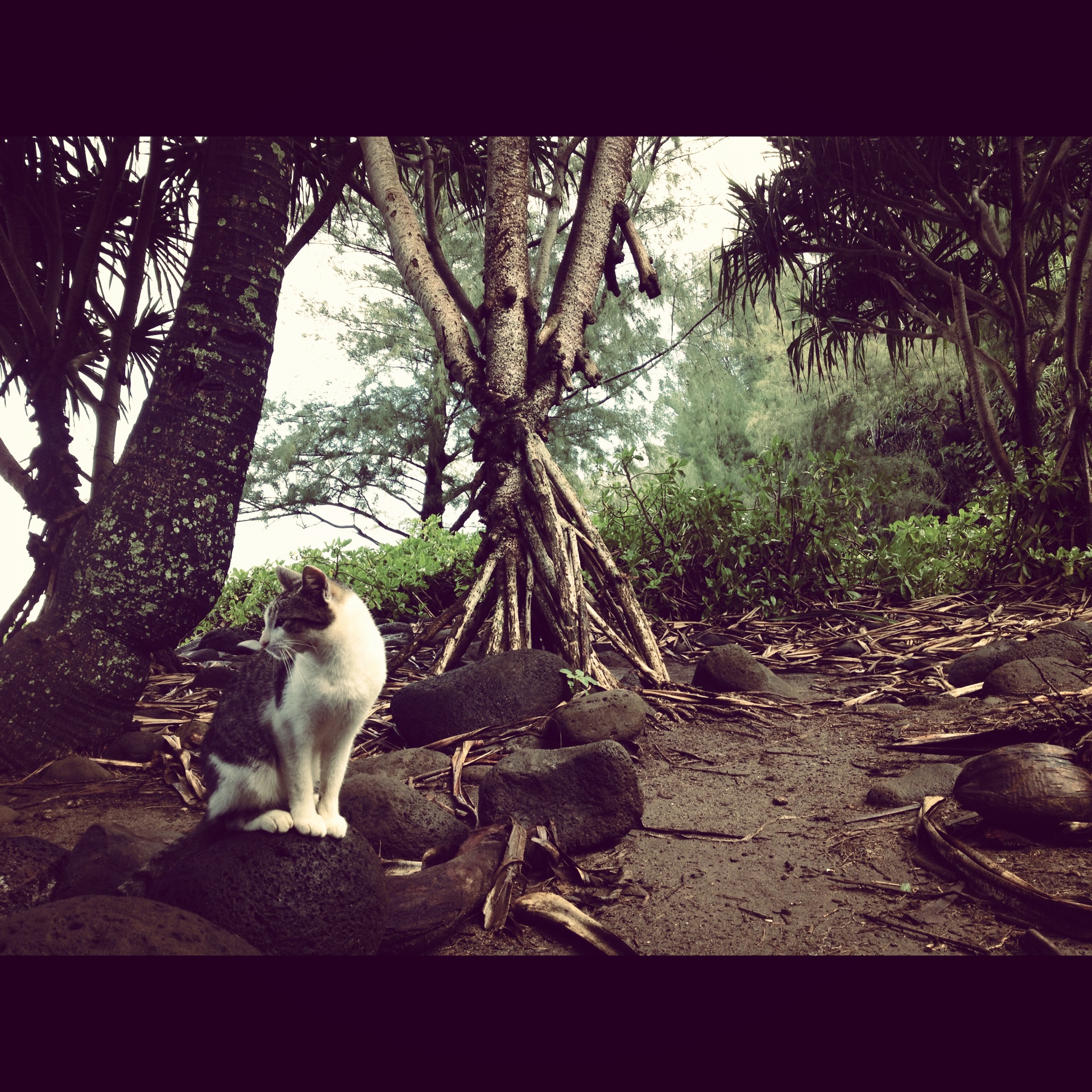 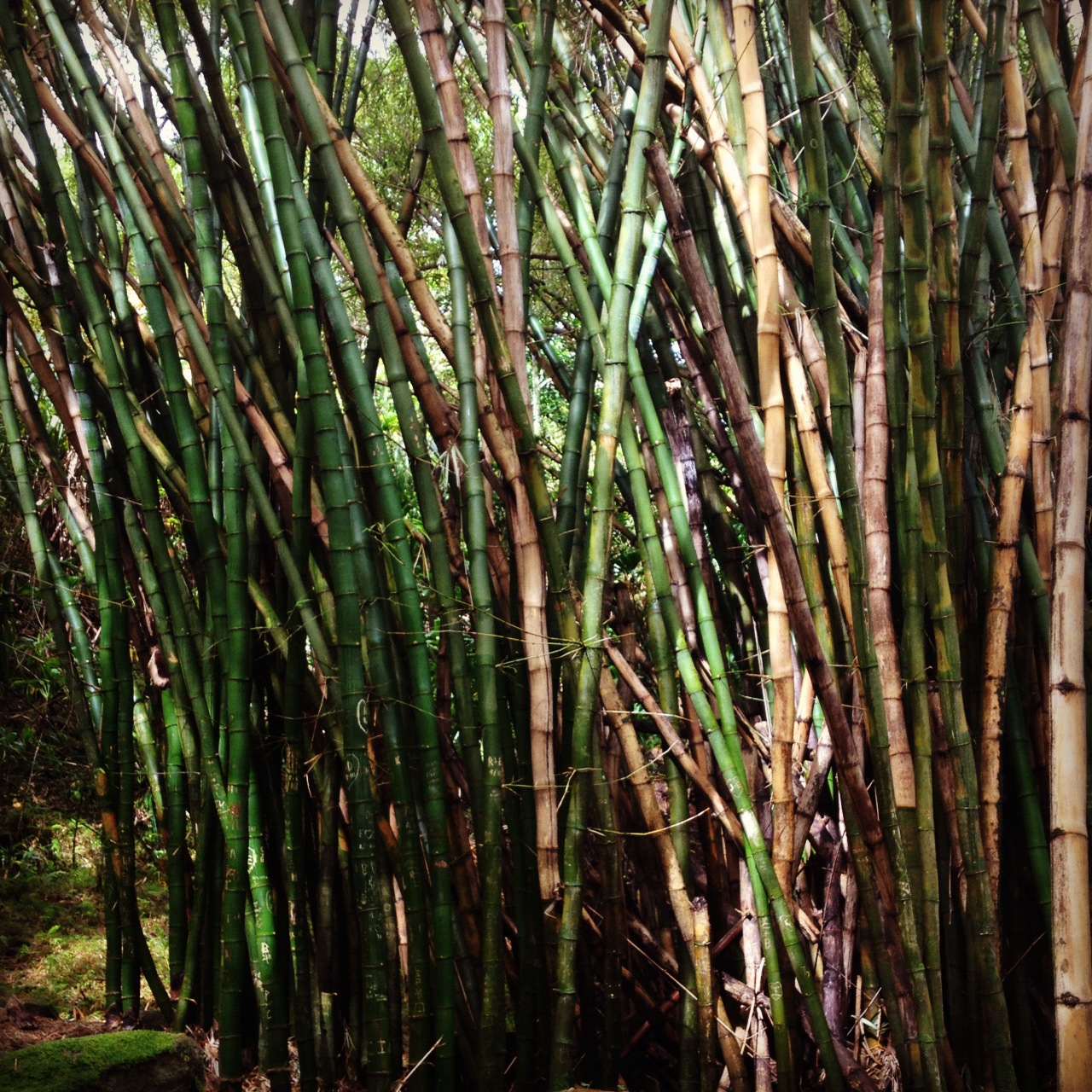 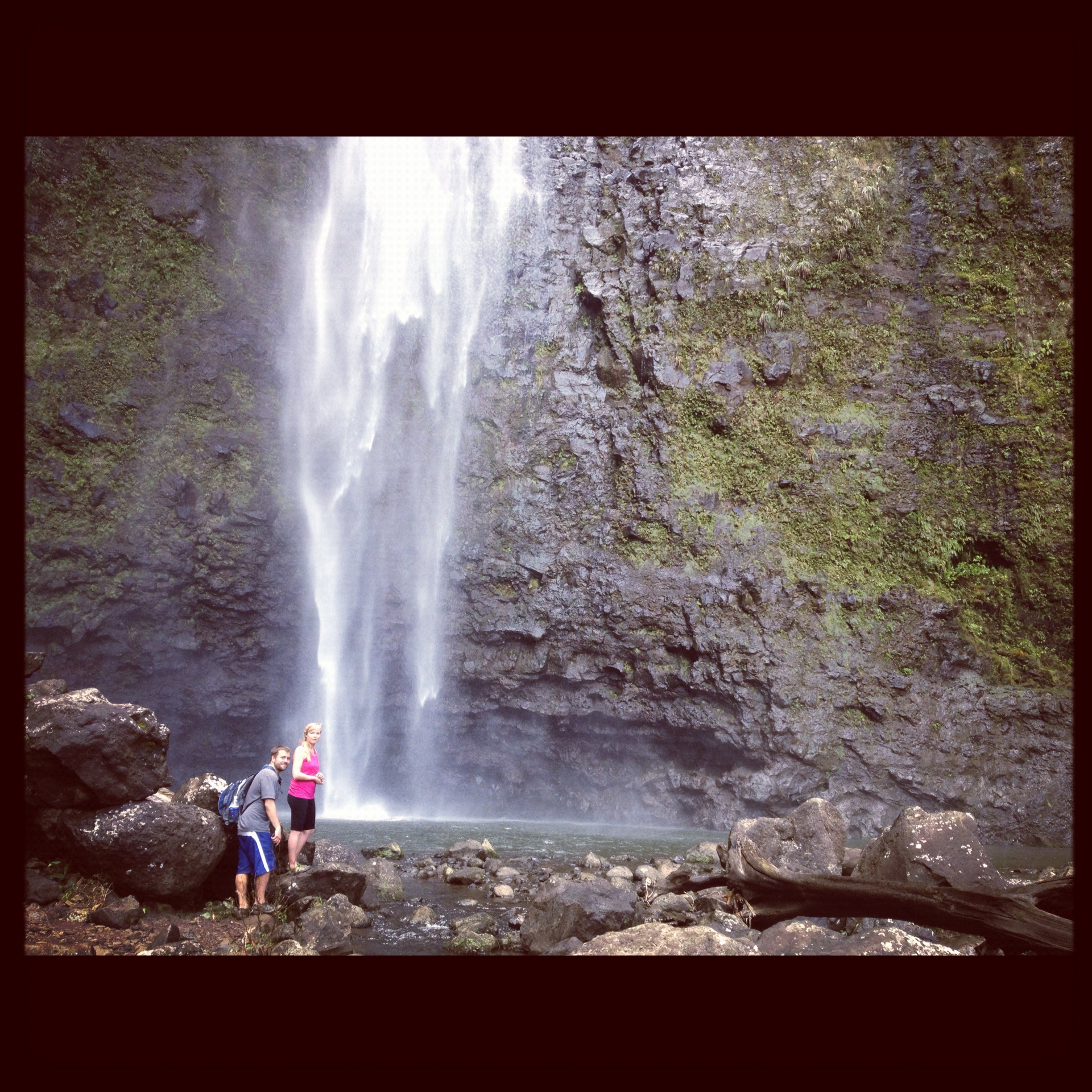 Later, resting on the beach back at the trailhead, we lay in the sand and got rained on and fought off the persistent feral chickens that overrun the island. I eavesdropped on another hiker’s conversation about the commune that supposedly still operates in the jungle, deeper down the trail, and mused about the notion of starting our own. Couldn’t be so bad. 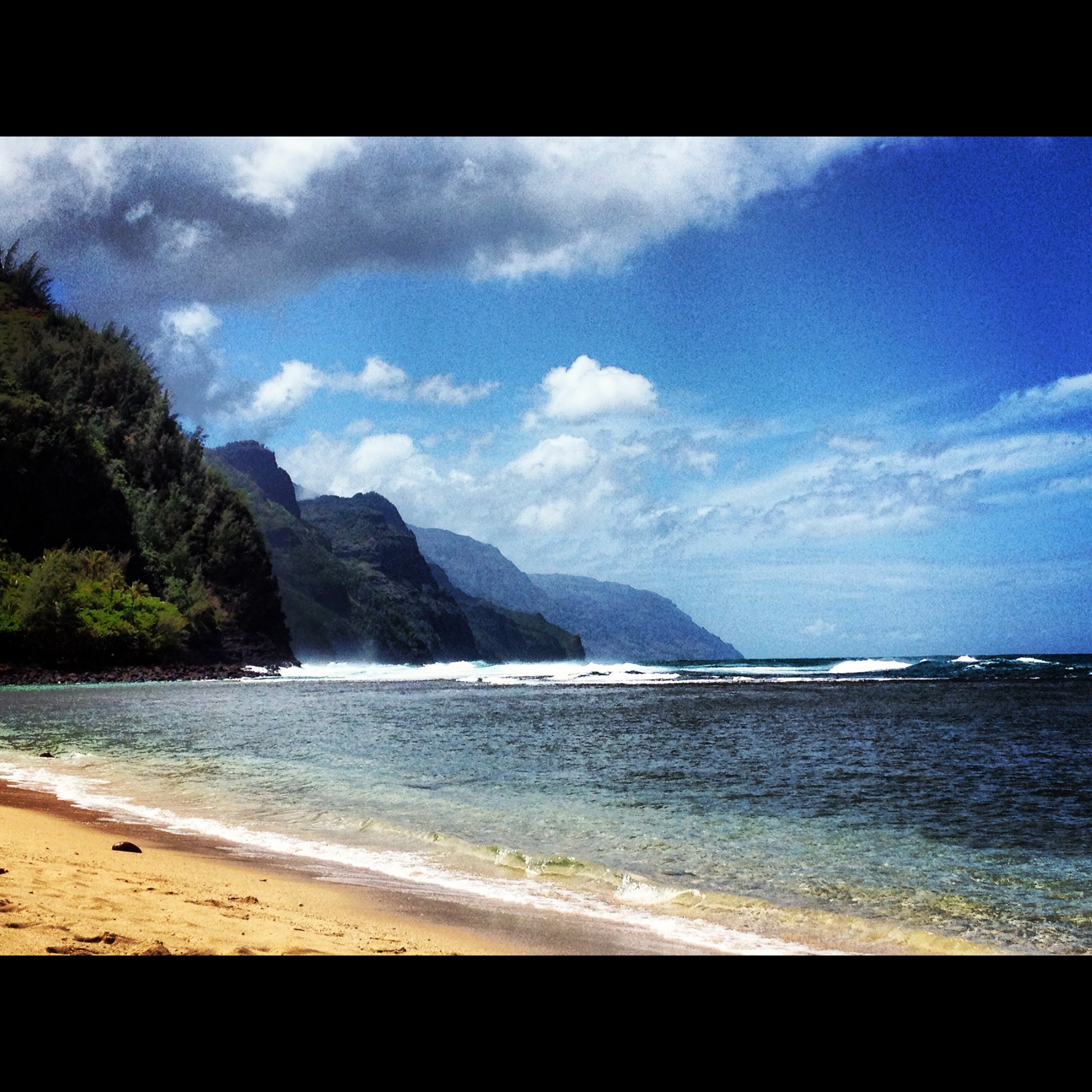 Kauai is small enough to drive around in just a few hours. We slept on the northern shore, but laid our pale, sun-starved limbs out to reclaim their color on eastern and southern beaches as well. Some days, we just did a lot of turning over in the sand. 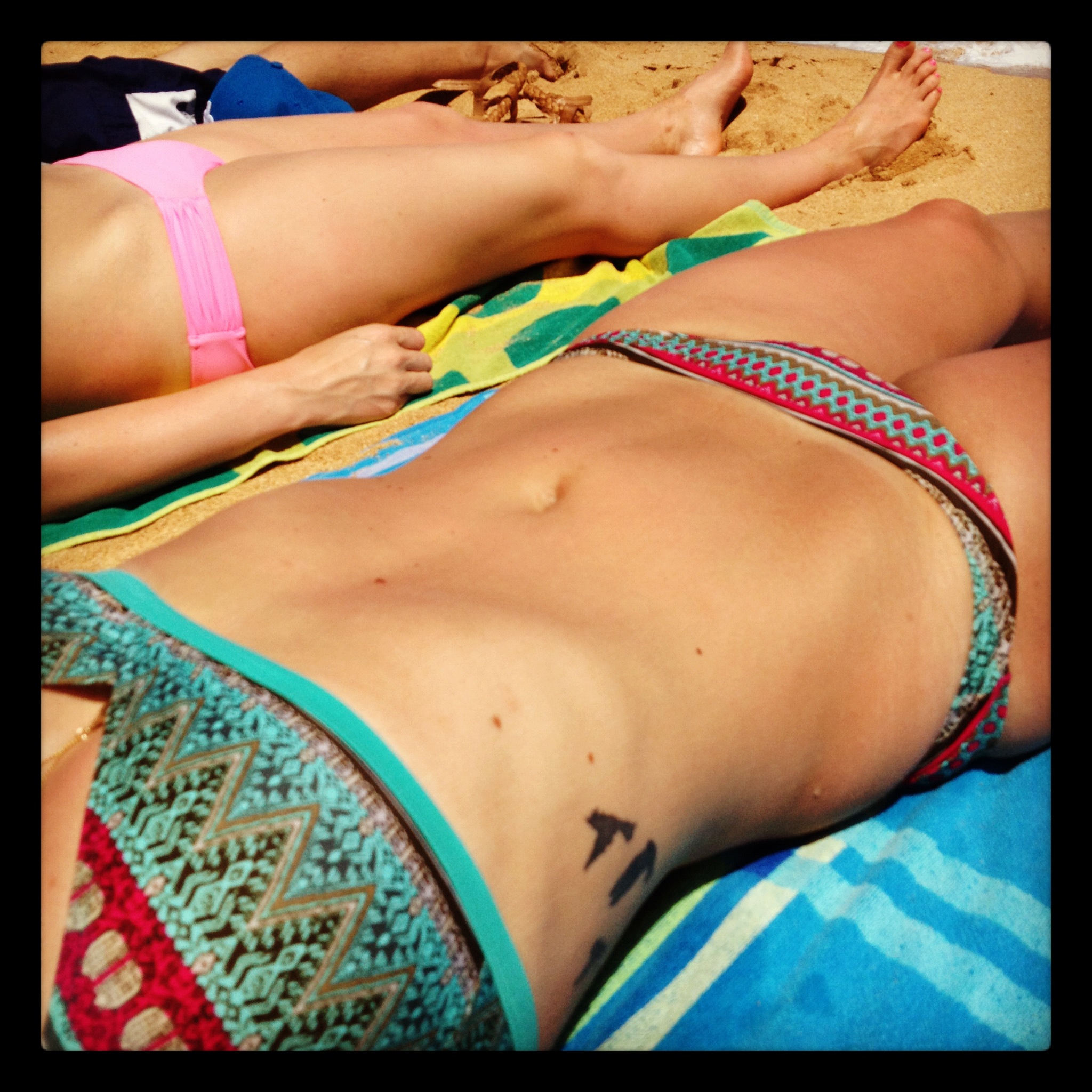 Other days, we soaked up chlorophyll under canopies of fronds and ferns so vividly green I often found myself stopping mid-step to blink and make sure it was real. 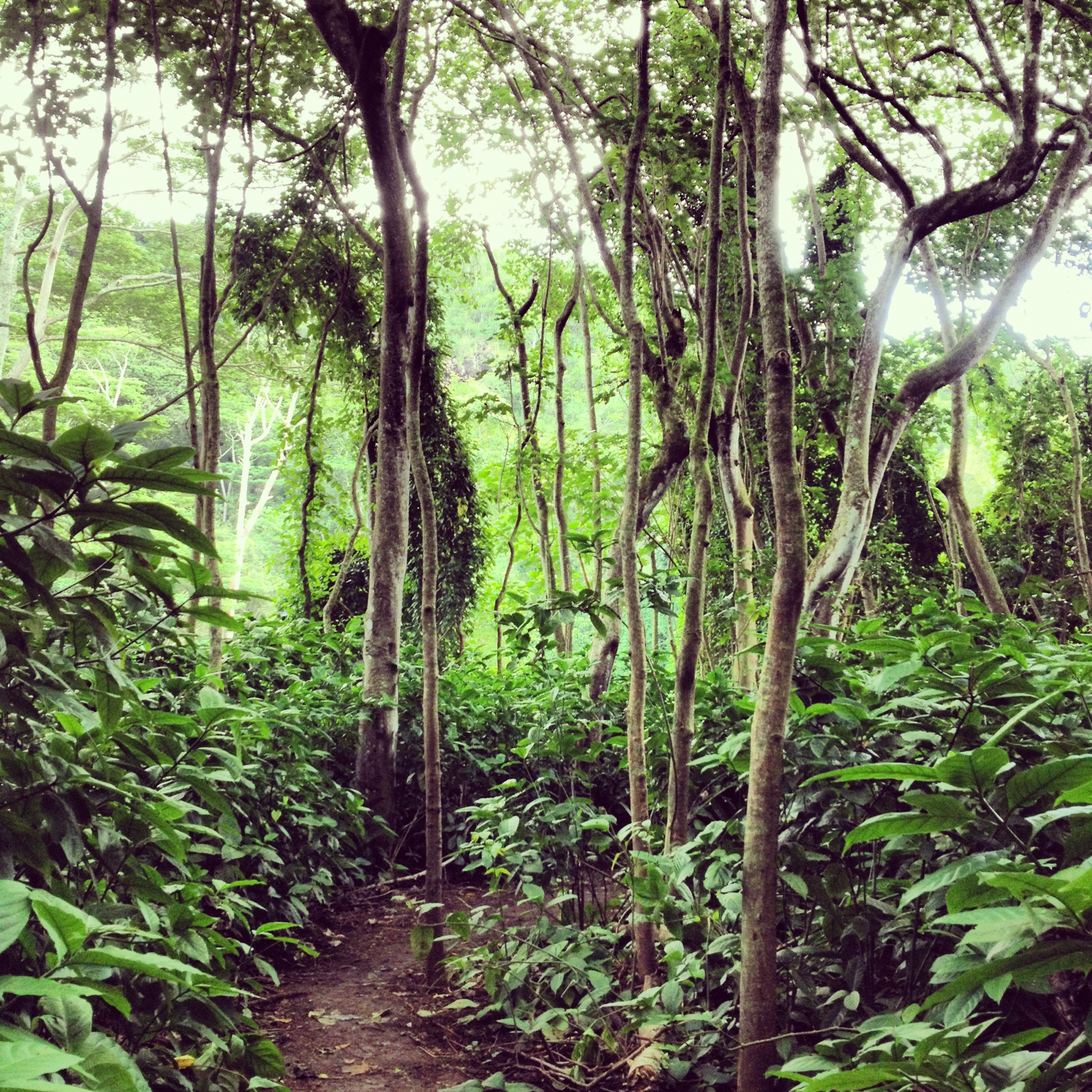 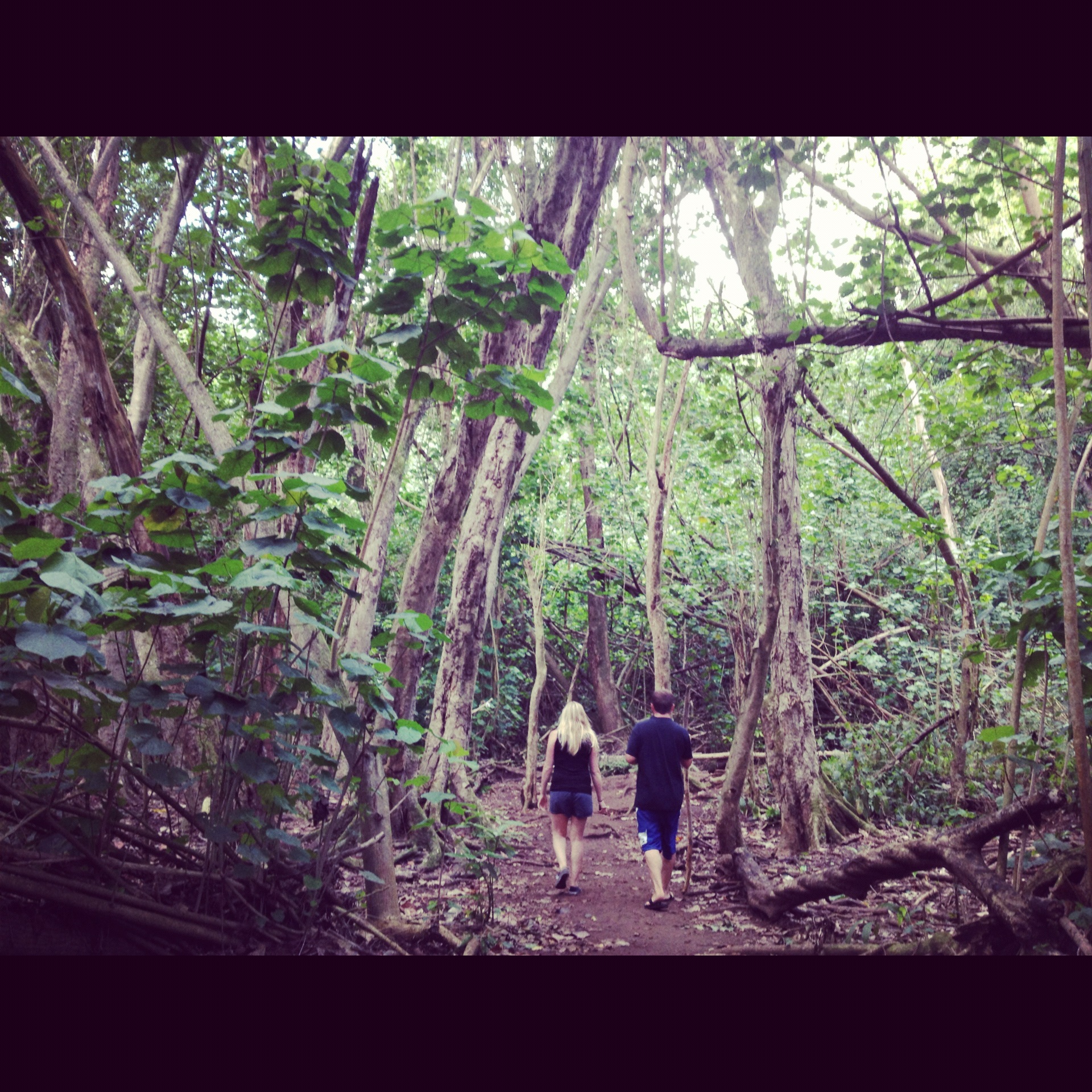 My fearless mother joined us for another trek into Waimea State Park. Here’s hoping I have her strength when I’m that age. We got an early start, loaded up with locally grown caffeine and still-oven-warm muffins, and drove west and north up a winding highway that made us all a bit ill. The clouds grew thicker as we climbed higher, and at the trailhead we found ourselves in a cold drizzle, staring into an abyss of condensation that blocked out all signs of existence. 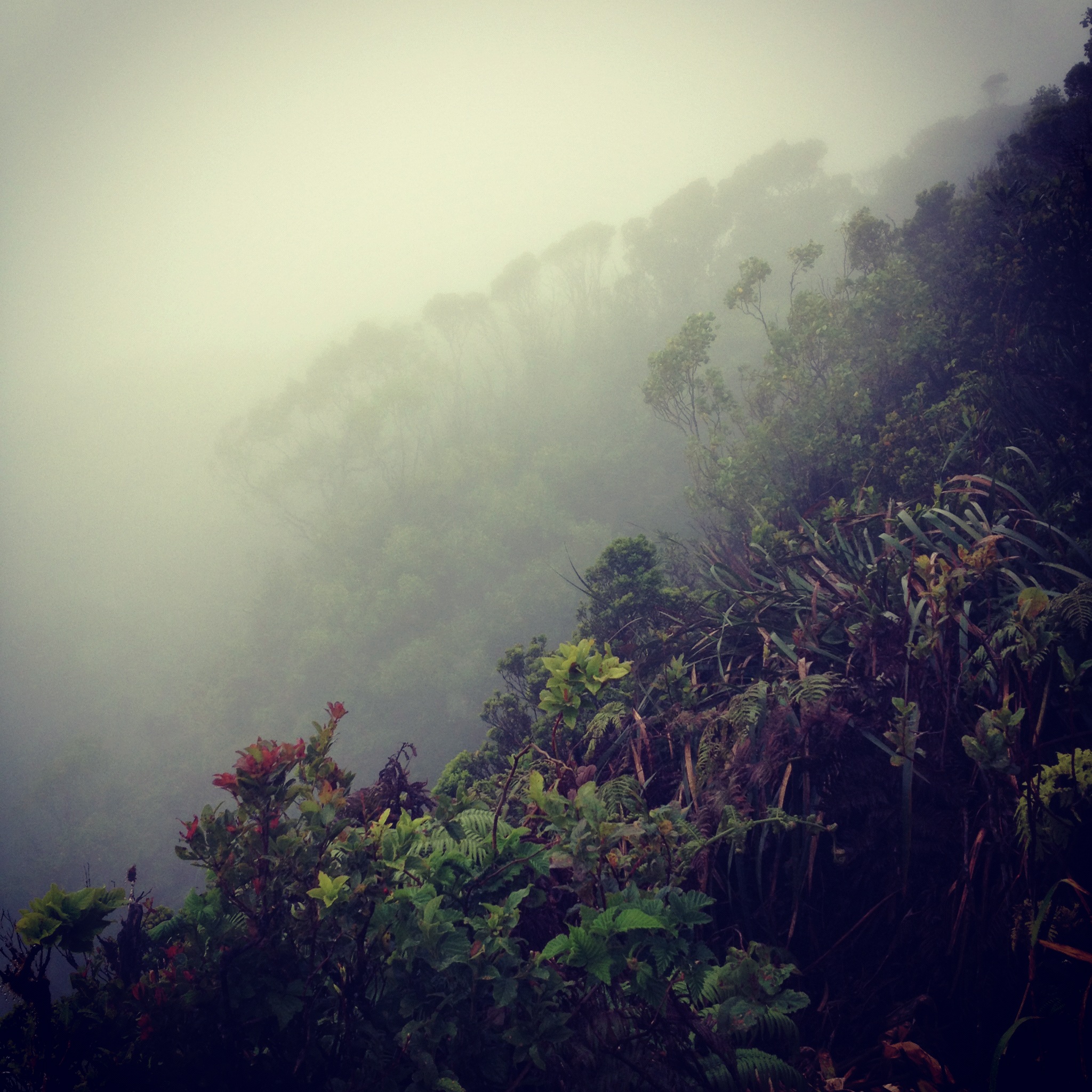 Still, we soldiered on. As the path grew worse, we slipped and cursed, but no one wanted to be the first to suggest turning back. So up and down and over slimy tree roots and slopes of red clay and muddy bogs of quicksand, we made our way through a near-magical rainforest that delivered us to the highest swamp in the world. 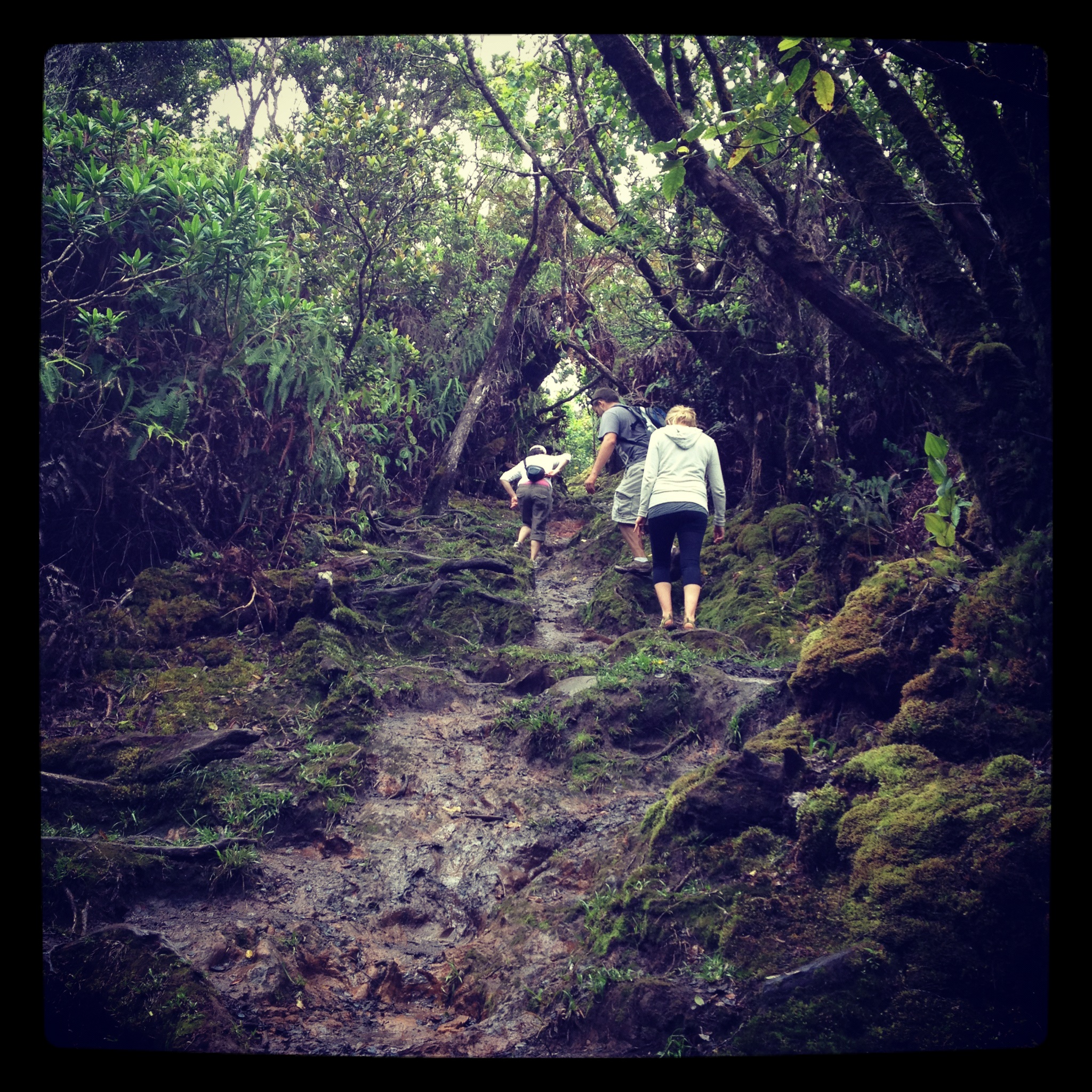 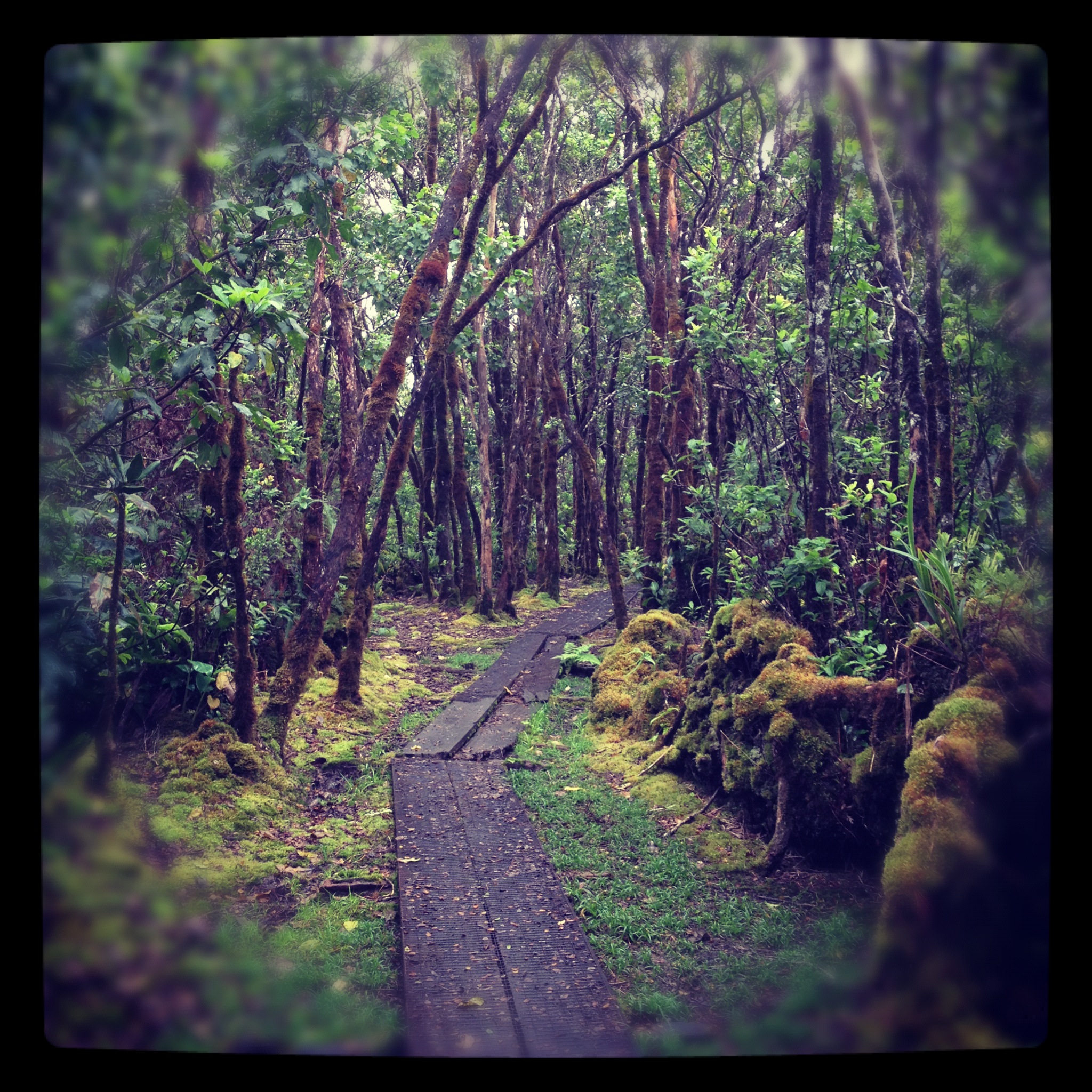 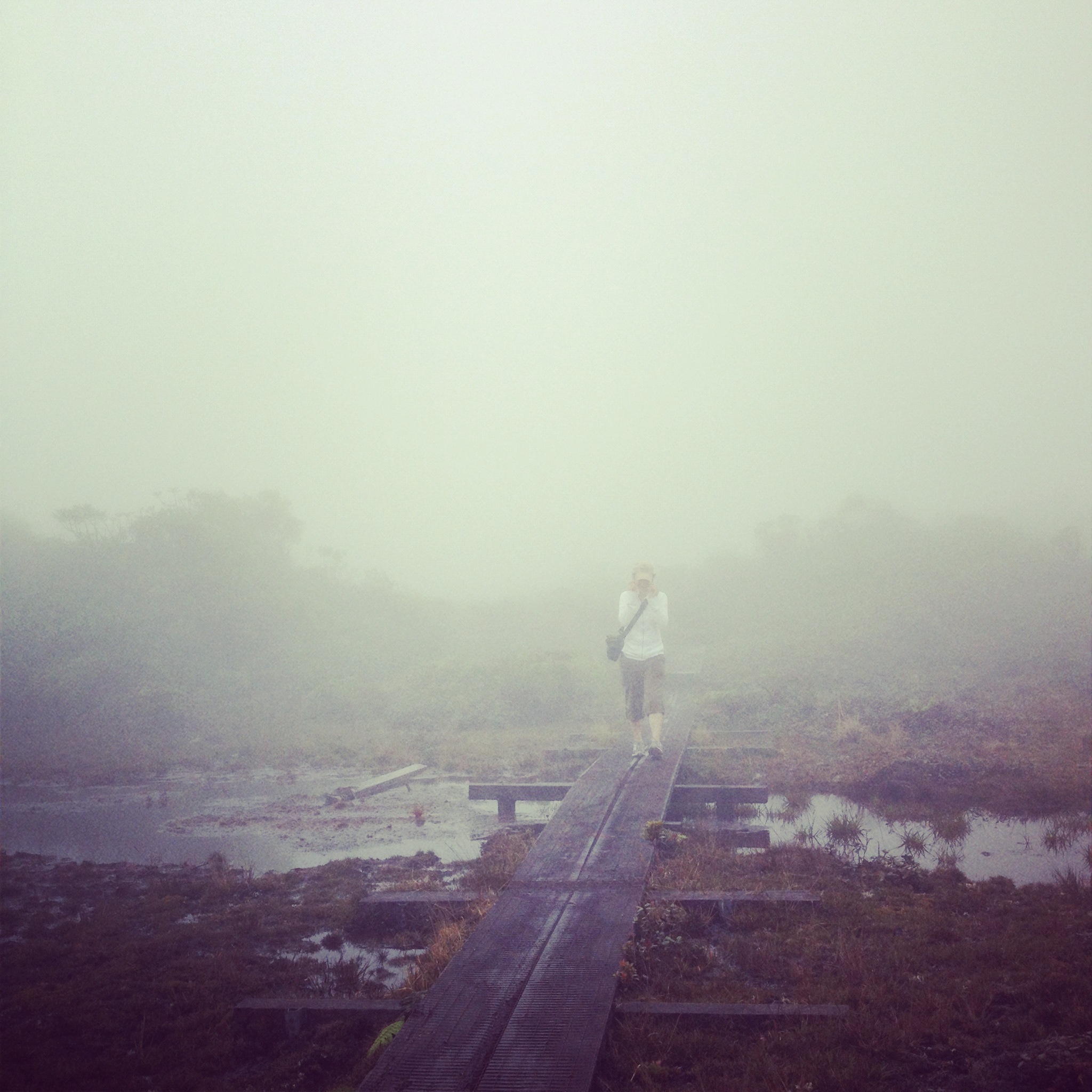 After several hours, we were soaked and aching and ready for the epic vista promised to us by guidebooks and maps and the Interwebs. But trudging along the rotting boards above the swamp, enshrouded in fog, we each silently doubted that the sun would ever shine upon us again.

This trail is said to be the highlight of many visitors’ journey to the island! claims more than one source.

I think my comrades would agree with me that the real worth of reaching the end was found in giving Tyler a chance to wander into the bushes to pee, and for us all to ravenously eat our peanut butter sandwiches. Here’s the amazing view we had, too: 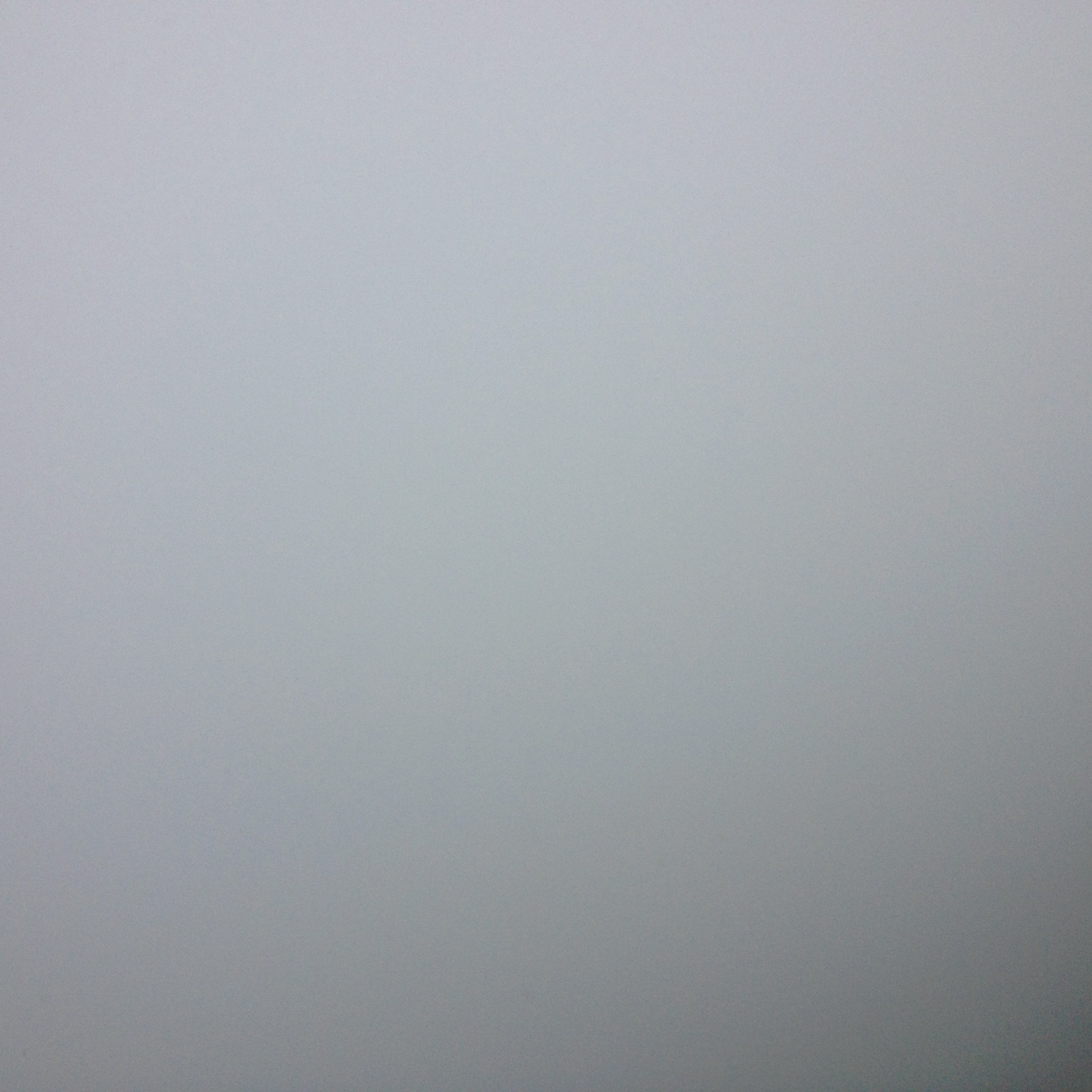 Ah, thanks Mother Nature, for that lovely little satire on life and expectations.

Peanut butter sandwiches consumed, there was nothing else to do. None of us wanted to wait around to see if the fog might blow off, so we shrugged soggily and turned around. Thankfully, Ms. Nature has a good sense of humor and rewarded us after we were nearly back to the trailhead. 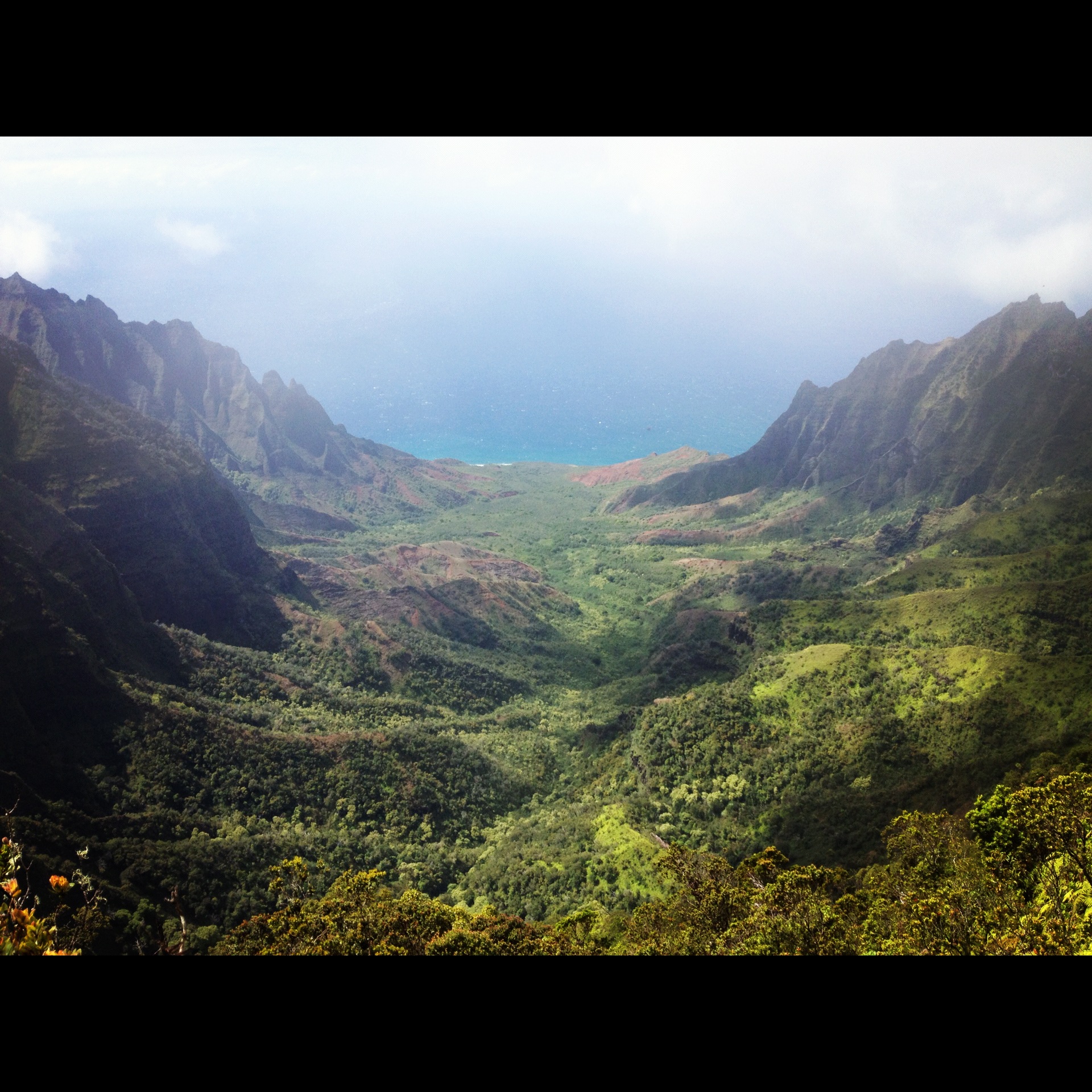 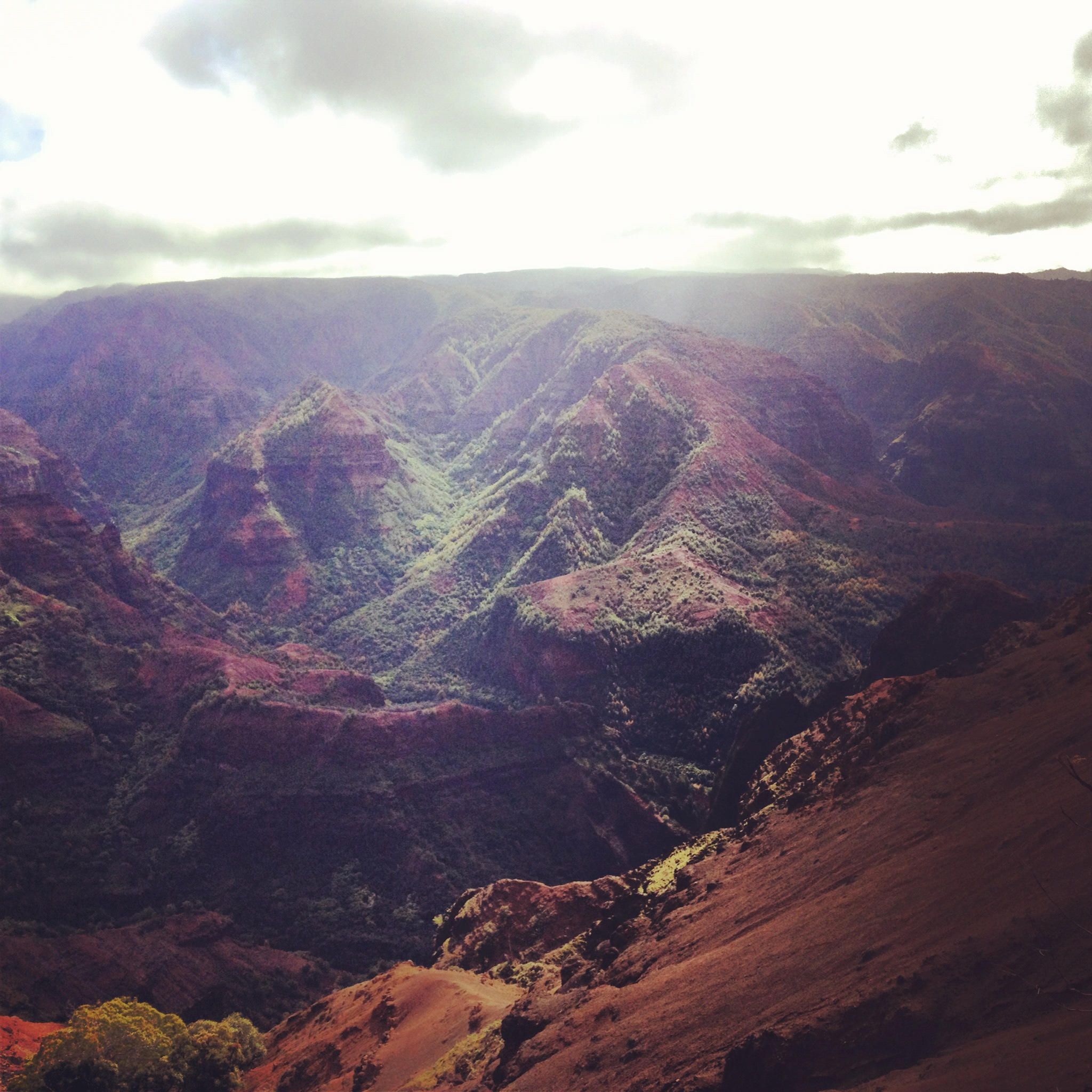 The rest of our time involved things like drinking fruity drinks, kayaking to a waterfall, swimming in the ocean, and getting gloriously sunburnt. Here’s a small recap: 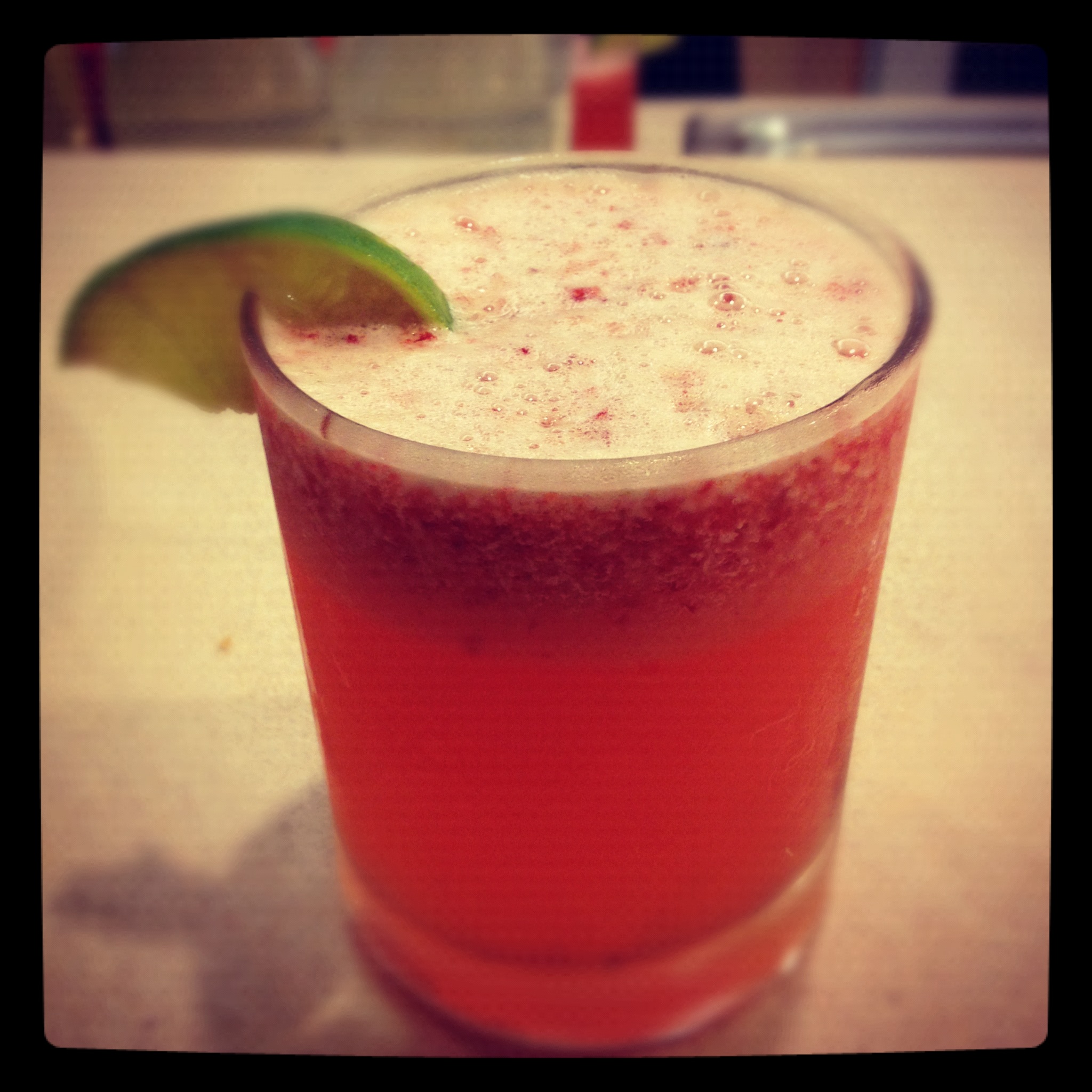 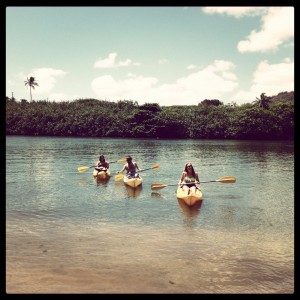 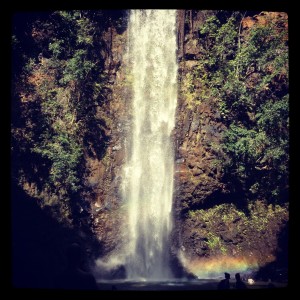 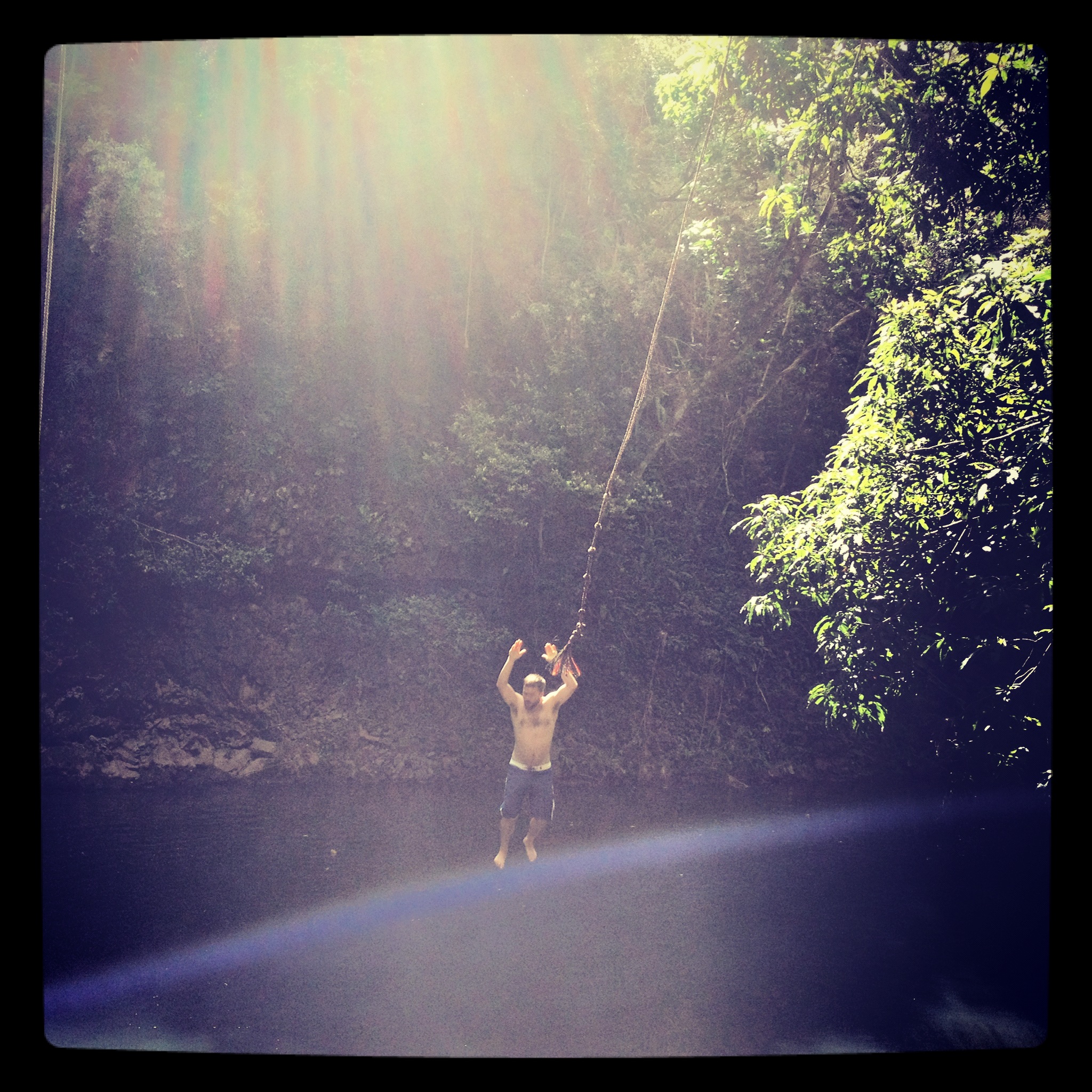 On the final night, the sole power plant on the island caught fire and all of Kauai was without electricity. I’ve never seen such a good-natured disaster. The grocery store was a jovial apocalypse, while sirens blared in the distance and we walked around trying to decide what pre-made things to buy for dinner, wondering if our flights would be canceled the next day. After walking out with a hodgepodge basket of sushi, hummus, cheese, salad, pie, and beer, word came that power was starting to come back in bits and pieces. We drove once more to the eastern shore, my favorite, and built a roaring bonfire on the sand. My parents joined us, and we sat in the glow of dancing flames and ate pieces of pie with our hands and talked about never going home. 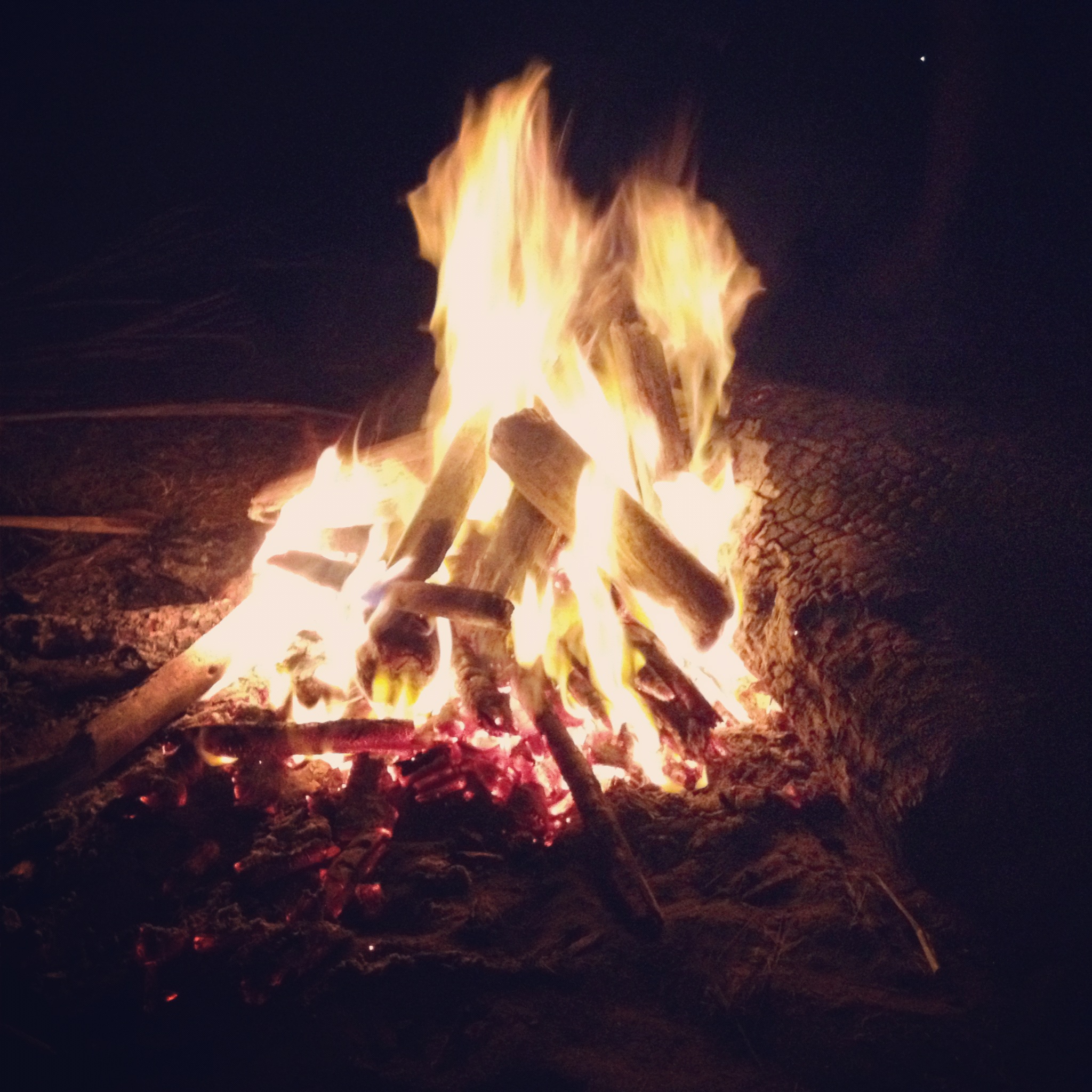 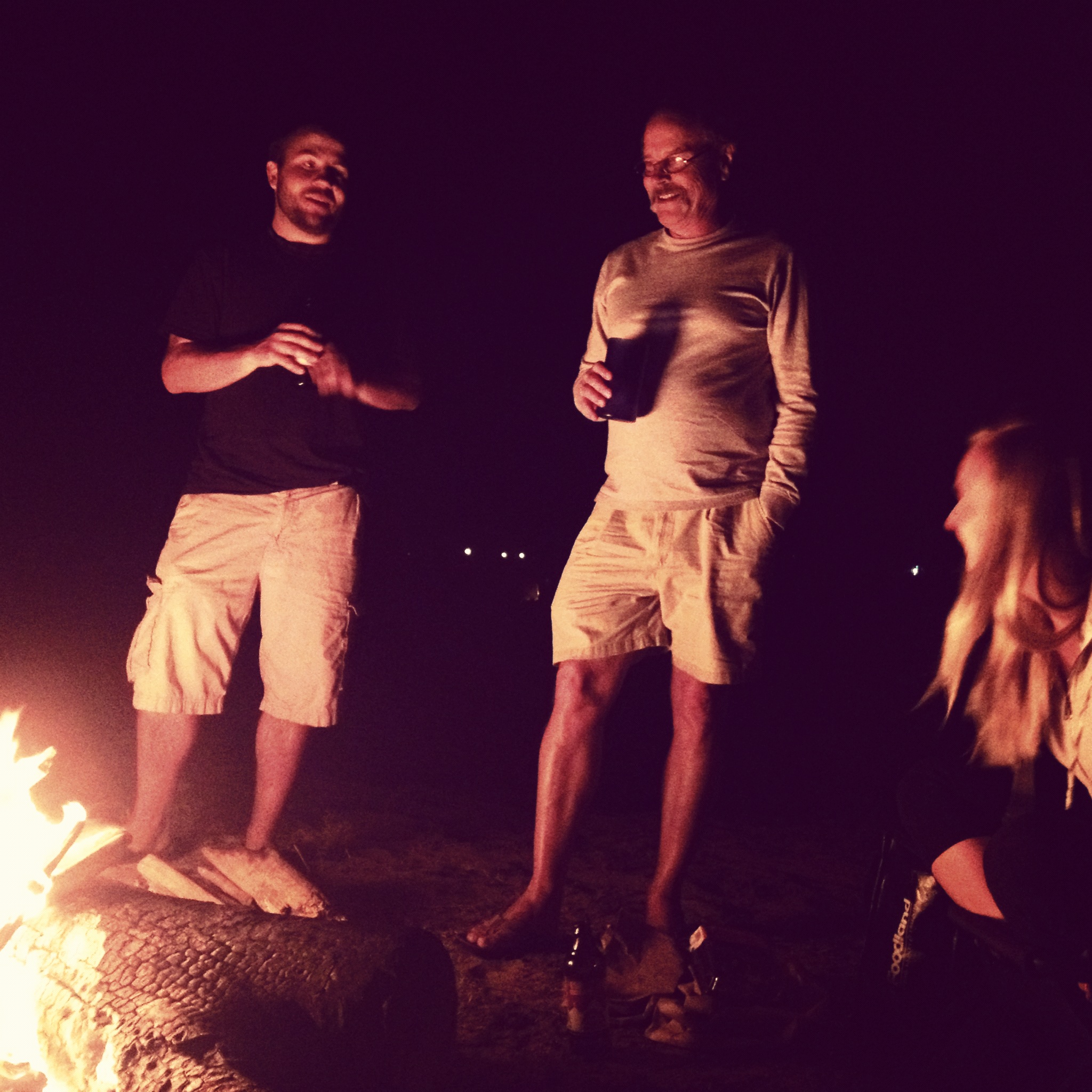 The sensation of brightness, warmth and confidence I felt about life and what lies ahead that swirled around me in the island breezes feels almost like a dream now, as I type this with chilled fingers from my cold little burrow of comforters and Afghan pillows, in the basement. And while the air here still carries so much damp heaviness, every breath I took there was a much needed lungful of lightness. I realized on the last day, while trailing my fingers out the car window as we rounded the coast toward one final sandy place to lie upon, that this was the first vacation I’ve taken in a year that didn’t account to me just writing grant reports from a makeshift, sunnier office. 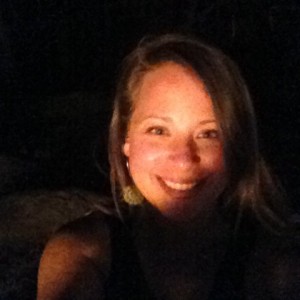 Missing the weird
The meanwhiles & in-betweens